Okay, this year’s Frosty Fest wasn’t so frosty, but it sure was festive.

That was the assessment of Captain Kindness, otherwise known as Dave Carrol of Freedom House, which mounted the eighth annual winter carnival over the Family Day weekend.

He and his son, Kid Kindness, aka Jared, found themselves walking around Harmony Square on Sunday shaking hands with adults and children minus the winter parkas and snow boots that normally come with mid-February fests.

Instead, they encountered a sea of people wearing shorts, flip flops and not a few muscle shirts who were taking in the brilliant sunshine, temperatures above 10C, and a skating rink that had been reduced in some parts to about a half-inch of surface water.

“The last two years were the coldest back to back,” he laughed, half shivering at the memories of bone-chilling temperatures that kept away droves of revelers.

“They had to use blowtorches to get the carnival rides going because none of them would start.”

“This year’s different. It’s not frosty, but it’s festive. It’s like 2013 when it was tropical like this and we had 17,000 people come. We can expect a return to those numbers this time.”

“I like seeing the community come together and enjoy an event in one spot instead of scattered all over the place,” he said.

At the taffy station, Holly Stewart and Amberlee Brown were rolling maple syrup into candy around sticks and handing them to lineups of revelers.

“Whether it’s cold or warm, this is always the best treat we have at Frosty Fest, Stewart smiled.

Five-year-old Nolan Ramsay couldn’t resist as he accepted a stick from Brown and promptly chewed the gooey mound.

“It’s sweet,” he said through his licking.

Their parents, Mike and Kristin Ramsay, said they were glad they drove the family from Delhi to the event.

“It feels good to wear flip flops at Frosty Fest,” Mike said, looking down at his colourful, albeit skimpy, footwear.

Over at the snow slide, a succession of youth stood atop a mound of snow strategically dumped on the Colborne Street side of the square and waited their turn to slide down what was rapidly becoming watery.

“It’s still cold on my butt and my hands, but it’s fun,” Isabelle Thompson, an 11-year-old Ecole Dufferin student, said as she scrambled to her feet after her slide.

“It’s very invigorating and my butt feels like it’s going to fall off,” added her friend Scarlett Davies, also at Ecole Dufferin.

On the Bell Stage, Jean-Pierre Gauthier and Jim Verdunst were creating sculptures out of blocks of ice for the eight consecutive year. This year, their chainsaws were carving a train set.

The pile of ice blocks were visibly dripping water beneath the sun’s warmth.

“Obviously, the train’s going to have a lot of water for the steam,” Gauthier joked.

“I forgot my mosquito net.” 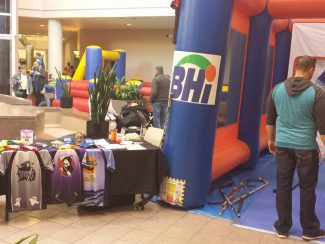