From June 14-22, the International Street and Ball Hockey Federation (ISBHF) Championships will be taking place in Kosice, Slovakia.  We are very proud to announce that two BHi players have been named to Team Canada for the upcoming tournament!

We had a chance to sit down with players, Brian Szolga and Iain Downes to ask them about the upcoming tournament.

You’ve been a member of Team Canada for a few years now, do you still get pumped to put on the maple leaf and represent your country?

Without a doubt! There are only 24 players from all of Canada that get to wear the leaf, being one of the 24 is definitely exciting and an honour. The respect that Canadian hockey players receive overseas is shocking to say the least. Prior to the 2017 tournament in the Czech Republic, I had no clue what to expect. I knew of stories other teammates had shared with me but it never really sunk in. It gave me a different perspective on the game and showed me what it really means to wear the Canadian jersey.

The presence of Ontario born players on Team Canada has increased over the past few years.  Is the quality of ball hockey in the province improving or are the top players finally getting discovered?

Tough question! I think Ontario has always had a large population of talented ball hockey players. Not to take away from the other provinces, but I think there is just more competition here in Ontario to play against. Players are improving their skills, training to get better and it’s resulting in more competitive leagues. I think the province itself has enough talent to form its own professional league like Switzerland and Slovakia has overseas.

You’ve played at the ISBHF World Championships before; how will this year’s tournament be different?

For starters, the location of the tournament. Kosice, Slovakia. The Slovak fans are one of a kind. I have never witnessed such raw passion and excitement from fans towards their team or country then when I was at the 2017 tournament in the Czech Republic. The Slovaks feed off of the crowd’s energy and use it against their opponent.

Secondly, not many people are aware but Canada currently holds the record for consecutive gold medal wins at the World Championships with 4. Slovakia has won 3 in a row (13,15,17.) So we need to do everything possible to ensure Canada’s record stands alone!

What are you looking forward to the most?

I am looking forward to the atmosphere again come tournament time. In Europe ball hockey is a whole other level of sport compared to what it is here. In Canada when I tell people I am going overseas to play, I usually get “really, it’s just ball hockey”. I would love to show them the 8000+ fans that are at each game, or the hundreds of kids fleeing to the players entrance after the game for pictures and autographs. I should buy a GoPro or something so I am able to share the experience with people.

Who are you expecting to be the biggest challenge to Team Canada?

The biggest challenge for us will be Slovakia. The Czech’s are close behind. I know Italy and Greece have also revamped their rosters so it is sure to be a very exciting tournament !

What adjustments (if any) will you need to make to your game for the tournament?

In a tournament like this I just try to play a defensive defenceman roll, take care of the ball in our end and make smart plays.  If there is one thing I will continue to work on it is my cardio and endurance. The floor over there is international size, so that means a lot of extra room for guys to carry the ball. I changed my diet and my training regiment at the gym to ensure my body is ready come tournament time.

In the 2017 finals against Slovakia, I had to watch the gold medal game from the bench because of a separated shoulder that I suffered in the semis against Greece.

I think it’s fair to say that I will be headed to Slovakia with some unfinished business to take care of!

This is your first time being named to Team Canada for an international ball hockey tournament.  How does it feel to know you’ll be wearing the maple leaf and representing your country on the international stage?

It’s an absolute honour to be representing my country and wearing the maple leaf for the first time. It really is a dream come true for me!

The presence of Ontario born players on Team Canada has increased over the past few years.  Is the quality of ball hockey in the province improving or are the top players finally getting discovered?

I would have to say that players are definitely continuing to improve year after year, but I’d also say the top players are also starting to get discovered in this province. I’ve played against many of the top players for years in the premier league and I believe it’s just become hard for management to ignore what the Ontario born players bring to the floor each and every game. But I also don’t want that to be misunderstood when it comes to the rest of the country, as I have seen and played against very talented players from all over the country.

You’ve played at the WBHF World Championships before; how do think the ISBHF tournament will be different?

It’s hard to say what the difference would be. From talk throughout the ball hockey world, the ISBHF tourney attracts the best of the best from each country so I’m very intrigued to see the level of competition we are about to face.

What are you looking forward to the most?

Honestly, I couldn’t say I’m looking forward to just one thing the most. We are going to Europe to play a game we love and that’s unbelievable in itself. However, I’m looking forward to playing at the highest level of this sport for the first time and doing it with several players that I’ve had the privilege of playing with or against before.

Who are you expecting to be the biggest challenge to Team Canada?

From years past it’s hard to ignore the challenge Greece and the Czech Republic put forth, but Slovakia is the defending champs and the team to beat as far as I’m concerned.

What adjustments (if any) will you need to make to your game for the tournament?

Well I believe I was chosen for the team based on the game I play and I don’t imagine the management and coaching staff would want me to change much. However, I believe you can never stop improving if you intend on competing at this level, so personally I have been cycling through some different workout programs to try and improve my strength and explosiveness on the floor. Other then that I try to treat all my games as a top level game to avoid developing any bad habits.

We couldn’t be more excited for Bryan and Iain to represent both BHi and Team Canada the ISBHF Championships.  For more information on the tournament CLICK HERE and be sure to cheer on these two June 14-22, 2019.

Until we meet again 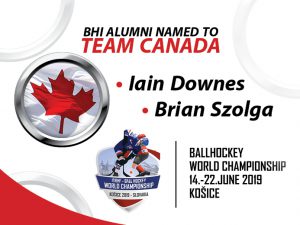 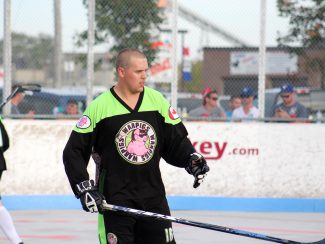 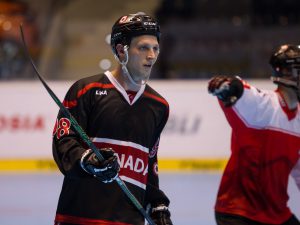